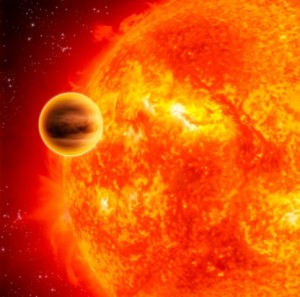 Starion along with the elders monitored their hypercoolers and turned to Deon, who stood in front of the room. Just above and slightly behind him was an elliptical, glowing ultrathin screen hanging from the ceiling. Deon pointed his sixth finger, or focus finger, next to his thumb at it and produced an I-spacer of a spiraling galaxy. The panoramic image revealed where each of the four planets was in relation to Evion. First it was in 2-D, but then Deon pulled the image out into 4-D with his right hand and six fingers. The planets were spread out all over the galaxy and at different distances from Evion. Each was highlighted by a different-colored small twinkling light.

The protruding 4-D holographic I-spacer was convex and so lenticular that Deon had a hard time differentiating between the image and the actual space in the room. Suddenly the image started faltering and Deon tried to fix it.

It was very quiet as they waited for Deon to resolve the issue, and Starion wished there’d been sound from this I-spacer. If there had been, it would have been generated from the sound e-molecule, a technology that allowed sound waves to originate from all inanimate objects in a room.

Starion anticipated some reaction from the others, who sat by the long, rectangular cobalt glass table with rounded corners. When there was no response from his counterparts, he glanced outside. There he could see the ever-changing sun’s pale light shining through the two warped corner windows. There were occasional light prisms. He thought about Evion’s ancient history books he was now reading instead of scanning, and he decided, if not for the dire circumstances, the light prisms might have been considered an art form—a new term for him that somehow inspired and excited him.

Attempting a deep breath, Starion glanced at his mentor, Ardia, next to him. She had recently been inspiring him with stories from books she had found in an ancient library. The room in their historic Audiseum had been exposed after a quake.

“There is an ancient Evion story of the quest that is still valid,” she had been telling him. “To discover one’s inward self, and then return with a life force message or clue that has been missing or forgotten from society.”

She had been the one who recommended he read these old books and stories word for word, instead of memory-scanning them. But now a new feeling kept running through him. The stories were reawakening something he couldn’t quite get a handle on. The problem was that along with the inspiration he was experiencing, he’d also been instilled with other emotions that weren’t as pleasant. He couldn’t understand why he couldn’t get rid of them—or why he’d begun to experience strange images that appeared in his mind while he slept.

Starion was nervous. Ardia caught it and telepathically connected with him. Starion,

do you feel like you are living the life that was intended for you?

I thought I was.

If you are, the path will open for you where they wouldn’t for anyone else.

Starion wasn’t so sure.

Ardia continued. Learn from this, Starion . . . not just their customs, but learn . . . find out if the people are living our ancient stories of the quest. And we must learn about their psychology and philosophies. I think it will be extremely important. 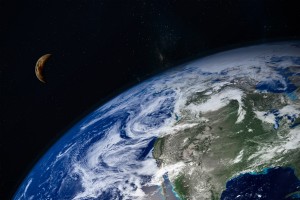 Still lying in a prone position, he saw a star ahead becoming larger and larger. Traveling closer, he could see the array of colored and different-sized planets in their elliptical paths. He had to put up his arm to partly block the sun’s bright shining light. But he didn’t care about anything.

First he passed by a small light brown planet. Then he flew by a large, dark blue planet, and then by another that was greenish-blue. Next was a pale yellow one that reminded him of one of his own solar system’s planets, Galion. Next, he traveled by an enormous orange planet with white bands. Finally, he passed by a red, barren planet, while feeling the ship slow even further.

As the craft approached the blue and white swirling planet Earth, Starion saw its white orbiting moon along with it. Then he saw two more planets between Earth and the sun: a gaseous yellow planet and a small grey planet that reminded him of his own destroyed Mercion.

As the v-breaker approached Earth and its moon, he couldn’t help but think to himself how closely this blue planet resembled ancient Evion. He remembered the book he had shown everyone at the elder room meeting about a mystical blue planet. The planet had a magical mythosphere, a place whose people had fantastic and mystical stories about gods, goddesses, demons, dragons, and heroes. There were outlandish and exciting adventures.